Kirk Cameron and the Crocoduck 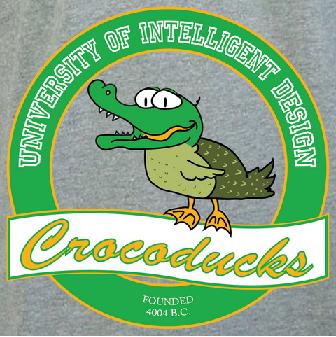 YOU all remember Kirk Cameron. He’s the former child star who grew up to be a creationist, about whom we’ve written a time or two. For example: Flat Earth, Uranus, & WorldNetDaily.

Cameron has embarked on a campaign with Ray Comfort to give away 100,000 copies of a “special edition” of Charles Darwin’s Origin of Species on 100 university campuses. It’s a special edition because it includes a 50-page introduction by Comfort that — allegedly — disproves evolution.

But that’s not all! It appears that Cameron’s creationist accomplishments are far more impressive than his coupling with Comfort. He’s also known for his appearance on the Bill O’Reilly show. Check out this YouTube video: Kirk Cameron and the crocoduck. To experience the thrill of actually seeing the boy wonder mention the crocoduck, scoot to the 2 minute point on the tape and then … behold!

As expected, the sinister evolution conspiracy isn’t taking this kind of pressure without fighting back. At Richard Dawkins’ website, they’re offering — yes! — a Crocoduck T-Shirt. That page says, with bold added by us:

After Kirk Cameron used the non-existence of the ‘crocoduck’ (half crocodile, half duck) as an argument against evolution, crocoduck-mania took to the web like wildfire. But instead of becoming the silver-bullet argument Kirk Cameron had hoped for, it became the icon of evolution-denying stupidity at which we can all laugh.

To celebrate this epic failure by the anti-evolution crowd, RichardDawkins.net has created the “University of Intelligent Design Crocoducks” team t-shirt!

We don’t plan to buy one, but it just might be what you’re looking for. Check it out.

12 responses to “Kirk Cameron and the Crocoduck”