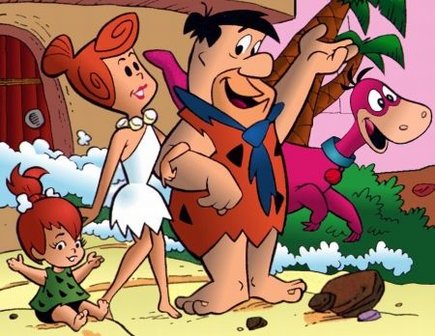 AT the Texas Tribune website we read Meet the Flintstones. Here are some excerpts, with bold added by us:

Nearly a third of Texans believe humans and dinosaurs roamed the earth at the same time, and more than half disagree with the theory that humans developed from earlier species of animals, according to the University of Texas/Texas Tribune Poll.

Then the article discusses the results of four questions “about biological history and God” that were asked:

38 percent said human beings developed over millions of years with God guiding the process and another 12 percent said that development happened without God having any part of the process.

Lumping natural and theistic evolution together, that’s 50% of Texans who gave a reasonable response. Let’s read on:

Another 38 percent agreed with the statement “God created human beings pretty much in their present form about 10,000 years ago.”

That’s a lot of young-earthers! We continue:

Asked about the origin and development of life on earth without injecting humans into the discussion, and 53 percent said it evolved over time, “with a guiding hand from God.” They were joined by 15 percent who agreed on the evolution part, but “with no guidance from God.”

That’s 68% who gave a reasonable response to the question. On the other hand:

About a fifth — 22 percent — said life has existed in its present form since the beginning of time.

Most of the Texans in the survey — 51 percent — disagree with the statement, “human beings, as we know them today, developed from earlier species of animals.” Thirty-five percent agreed with that statement, and 15 percent said they don’t know.

And this is the most amusing part:

Did humans live at the same time as the dinosaurs? Three in ten Texas voters agree with that statement; 41 percent disagree, and 30 percent don’t know.

There’s more information in the article, especially about the religious and political breakdown of the responses. Here’s a sample:

And this is interesting: Regarding the question of whether dinosaurs and humans lived on the planet at the same time, as expected — Perry supporters were a good share of such respondents, but Kay Bailey Hutchison had the largest share of voters who believe in that coexistence.

This entry was posted in Evolution, Intelligent Design, Politics. Bookmark the permalink.