This Is Your Brain on Creationism 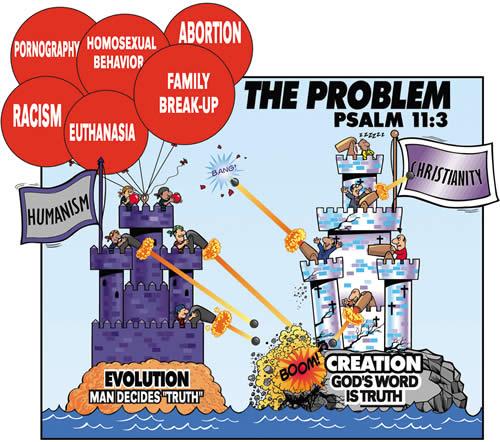 That picture is the thrilling — some might say chilling — climax found at the end of an article at the website of Answers in Genesis (AIG), one of the major sources of young-earth creationist wisdom. The article is titled Where Did the Idea of “Millions of Years” Come From?

The article begins with a summary — written by creationists of course — of the history of the science of geology. We’ll spare you most of that, but they acknowledge that by he time of Charles Lyell, a geologist and friend of Charles Darwin, it had been long accepted in scientific circles that the earth was old and there was no evidence for a global flood.

We’ll jump in at that point. Here are some excerpts, with bold added by us:

By the end of the 19th century, the age of the earth was considered by all geologists to be in the hundreds of millions of years. Radiometric dating methods began to be developed in 1903, and over the course of the 20th century that age of the earth expanded to 4.5 billion years.

Okay, now what? Then they describe the different ways that Christians responded to this developing science, saying:

In spite of the efforts of the scriptural geologists [who insisted on believing in a roughly 6,000-year-old earth and that fossil-bearing rock strata were deposited by Noah’s flood], these various old-earth reinterpretations of Genesis prevailed, so that by 1845 all the commentaries on Genesis had abandoned the biblical chronology and the global flood; and by the time of Darwin’s Origin of Species (1859), the young-earth view had essentially disappeared within the Church. From that time onward, most Christian leaders and scholars of the Church accepted the millions of years and insisted that the age of the earth was not important

As a result, most seminaries and Christian colleges around the world are compromised.

Compromised! What then? Then we get the contemporary creationist types — like AIG — who are throwbacks to the days of the scriptural geologists. We won’t attempt to discuss their position. What follows are some excerpts grabbed from the rest of their long essay. These appear sequentially, but we’ve left large gaps, so you’ll have to click over to AIG and read the entire essay if you want to appreciate these excerpts in context. Here we go:

The sad irony of all this compromise is that in the last half century, the truth of Genesis 1–11 has been increasingly vindicated, often unintentionally, by the work of evolutionists.

These “neocatastrophist” reinterpretations of the rocks have developed contemporaneously with a resurgence of “Flood geology,” a view of earth history very similar to that of the 19th-century scriptural geologists and a key ingredient of young-earth creationism, which was essentially launched into the world by the publication of The Genesis Flood (1961) by Drs. John Whitcomb and Henry Morris. This movement is now worldwide in scope, and the scientific sophistication of the scientific model is rapidly increasing with time.

Many Christians today are arguing that we need to contend against Darwinism with “intelligent design” arguments and leave Genesis out of the public discussion. But this strategy was tried in the early 19th century … and did nothing to retard the slide in the culture toward atheism and deism. In fact, by compromising on the age of the earth and ignoring Scripture in their defense of Christianity, they actually contributed to the weakening of the Church. The same is happening today.

The scriptural geologists of the early 19th century opposed old-earth geological theories not only because the theories reflected erroneous scientific reasoning and were contrary to Scripture, but also because they believed that Christian compromise with such theories would eventually have a catastrophic effect on the health of the Church and her witness to a lost world.

Okay, they reject Intelligent Design as bad theology and they insist on that old-time creationism. Now here comes the final part of the article that introduces the grotesque drawing at the top of this post:

It is time for the Church, especially her leaders and scholars, to stop ignoring the age of the earth and the scientific evidence that increasingly vindicates the Word of God. Christians must repent of their compromise with millions of years and once again believe and preach the literal truth of Genesis 1–11. It is time to take our culture back.

The question, dear reader, is this: Will we let the creationists take the Enlightenment from us?

11 responses to “This Is Your Brain on Creationism”