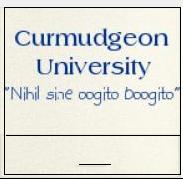 As advertized on matchbooks

YOUR Curmudgeon is, as you know, a non-judgmental, sensitive, compassionate, caring-sharing evolutionist, with ooey-gooey feelings and a touchy-feely attitude. We embrace diversity and practice togetherness. We care for the planet. We feel your pain. We are a citizen of the world, and we’re At One with all things. Our fondest hope is that we’ll all get along and everything will be nicey-nicey and fuzzy-wuzzy.

Our humble blog seeks to present all sides, including not only the strengths but also the weaknesses of the theory of evolution. We’re not afraid to teach the controversy. That is our Curmudgeonly statement of principle, to which we courageously adhere — except when it might give offense.

Therefore, it grieves us to see how Casey Luskin has been treated by the science side of The Controversy between evolution and creationism. There are, perhaps, thousands of blog posts that ridicule the lad. There are entire internet forums devoted to doing so. As if that weren’t enough, even the neo-theocrats at the Discovery Institute’s Center for Science and Culture (a/k/a the Discoveroids) disrespect Casey.

The Discoveroids have Senior Fellows and plain old Fellows — they have Fellows all over the place and up the wazoo, but Casey isn’t one of them. They have highly-compensated Officers, Directors, Trustees, and Key Employees, as disclosed in their 2007 Tax Return. But despite his dedication, Casey has been excluded — Expelled! — from their upper ranks.

So we’ve been thinking about what we can do to give Casey the recognition he deserves. He doesn’t qualify for our coveted Buffoon Award, because that’s rarely given; when it is, it’s only for creationist accomplishment at the highest level. But surely, we told ourselves, there must be something we could do for a dedicated but low-level creationist campaigner like Casey.

And then we remembered something from an old post: Earn a Degree in Creationism Today! There it was revealed that we are the Supreme Chancellor of the prestigious and world-famous Curmudgeon University. With the powers that our exalted position provides us, we are uniquely positioned to bestow upon Casey the accolades he deserves, but which a cruel, Darwinian world has thus far denied him.

Accordingly, as Supreme Chancellor, we proudly announce that in appreciation of his sincere and tireless efforts in the cause of creationism, Casey Luskin is hereby awarded the title of Curmudgeon University Fellow, with all the rights and privileges thereto appertaining.

23 responses to “Casey Luskin Is Named a Curmudgeon Fellow”