Tampa Creationist Back in the Headlines 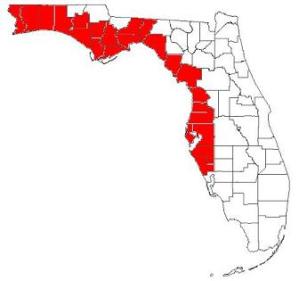 We have more news from that enchanted region we’ve been calling The Florida Ark. The what? According to the Curmudgeon’s Glossary:

The Florida Ark is that concave stretch of coast — an arc, get it? — starting at the Alabama border and then sweeping down the shore of the Gulf of Mexico all the way to Tampa, and a bit beyond. This blessed region is home to a great number of creationists.

Our last post about Terry was Tampa Creationist Running for School Board. If you go there you’ll learn that this virtuous man is not only an advocate of creationism, but he also wants to police everyone’s private life. He advocates abstinence, opposes lap dancing and pornography, and he wants God back in the classroom. We imagine he’s also a lot of fun at parties.

As our title says, Terry is back in the news again. In the St. Petersburg Times we read Gay-rights advocates protest antigay activist’s appointment to county board. Your Curmudgeon doesn’t blog about that specific issue, but because it’s another dimension of Terry’s worldview, we’ll give you some excerpts, with bold font added by us:

Hundreds of people this week wrote to Hillsborough County commissioners protesting the December appointment of antigay rights advocate Terry Kemple to the county’s Board of Human Relations.

Why does a county need to spend the taxpayers’ money on a board like that? Shouldn’t they just pave the roads, put out fires, police the highways, and keep the sewage system functioning properly? Hey, the board has a website: Human Relations Board. Let’s read on:

Kemple is president of the Community Issues Council, a local group that promotes conservative values. He ran unsuccessfully last year for the county School Board on a platform of abstinence, religion and opposition to Darwin-based biology. He also spearheaded the 2008 effort to pass Amendment 2, which defines marriage as the union of a man and a woman.

Who better to police human relations than a man like Terry? Wouldn’t everyone like to live under his enlightened supervision? We continue:

Kemple was appointed to the Human Rights Board Dec. 15 by a 5-2 vote, with Commissioners Les Miller and Kevin Beckner, who is openly gay, in favor of someone other than Kemple.

It must be fun being a reporter assigned to writing about the antics of that board. Endless amusement! Here’s more:

Commissioner Victor Crist said he wasn’t aware of Kemple’s views or background until now. But had anyone spoken up during Kemple’s appointment consideration, Crist might have questioned Kemple more closely to ensure that he would be open-minded and tolerant.

Still, “At this juncture, let’s wait and see what kind of participant he is. He could very well bring a dimension to the board that helps bridge peace, you know, we don’t know yet,” Crist said. “But I do know one thing — everybody and all perspectives deserve a seat at the table, and to try to muzzle that would be muzzling democracy.”

Sure — if a county is weird enough to have such a board, Terry deserves a seat at the table. So where does this matter stand at the moment? We’re told that at the end of the article:

[Terry Kemple] said he wants to use his position to promote equal rights for all, not special rights for some. And he does not plan to step down. “I have a mission in life,” Kemple said, “and to allow some naysayers to deter me or sway me from my mission would be an inappropriate decision.”

Yes, he’s on a mission. Creationists usually are. We expect to be hearing more about Terry.

3 responses to “Tampa Creationist Back in the Headlines”