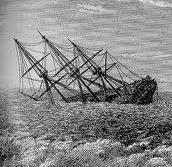 We learned about this news from a post at PZ’s blog, and it’s so interesting that we have to write about too. It concerns the Creation Museum run by Answers in Genesis (AIG), described in the Cast of Characters section of our Intro page.

At the website of Cincinnati CityBeat, which Wikipedia says is: “an independent local arts and issues publication covering the Cincinnati, Ohio area. It has the second largest readership in the Cincinnati area behind the daily Cincinnati Enquirer,” we read this fascinating story: Creation Museum Attendance Drops for Fourth Straight Year. Here are some excerpts, with bold font added by us:

The Creation Museum in Petersburg, Ky., created quite an uproar in 2007 when it opened with exhibits showing early humans co-existing with dinosaurs. Five years later, the public fascination with that take on paleoanthropology seems to be fading.

Fading? Egad — how can that be? You want to know more, don’t you? Okay, the news story continues:

This week, the museum told CityBeat that attendance for the year ended June 30 came to 254,074. That amounts to a 10 percent drop from last year’s 282,000 and is the museum’s fourth straight year of declining attendance and its lowest annual attendance yet.

Michael Zovath, senior vice president for the Creation Museum and its parent organization, Answers in Genesis Inc., offered nothing to blame but the brontosaurus-slow U.S. economy and pterodactyl-high gas prices.

A half-million dollar loss? How is that possible? Here’s more:

To ensure its financial health, the Creation Museum raised admission prices on July 1, to $29.95 for adults, up from $24.95. Zovath said the 20 percent jump hasn’t slowed down traffic.

If traffic hasn’t slowed down, then why is attendance is declining? Anyway, that’s the news. Oh, while we’re on the subject of “foundering,” you already know that Hambo’s proposed replica of Noah’s Ark is having financial difficulties — see More Money Problems for Ken Ham’s Ark.

It’s gonna take a miracle to keep ol’ Hambo’s empire afloat. But then, all the sinners laughed at Noak’s Ark, and you know what happened to them. Don’t worry about AIG — miracles are their stock in trade.