Kathy Martin of Kansas — She’s Back! 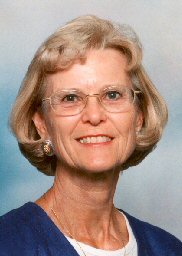 If you don’t remember Kathy Martin, then you don’t remember the Kansas evolution hearings of 2005, about which we wrote Kansas Flashback: The Crazy Days. The Kansas State Board of Education, led by Kathy Martin and Connie Morris, actually decided to re-define the meaning of science in Kansas so that it would also include supernatural phenomena — thus allowing creationism to be taught in science class.

The last time we wrote about Kathy was a couple of years ago: Kansas: Kathy Martin Out, Evolution In, when she failed to win a seat for the Kansas House of Representatives 64th District. We thought we had seen the last of her, so we reluctantly dropped her name from our news sweeps, as we’ve done over the years regarding a whole Gallery of Creationist Hotties.

But today we received a tip from a clandestine operative in Kansas, who informs us that Kathy is once again trying to win a seat in the Kansas legislature. The website BallotPedia has an entry for the contest. It doesn’t say much, but it tells us:

Very exciting! Kathy lost to Swanson in the last election. The primary election is only a few weeks away. We can’t find Kathy’s official campaign website — if there is one — but our operative gave us a link to Women for Kansas, which appears to be the website of a group that “created a vision statement for what we believe Women for Kansas should stand for.” We can’t determine whether, in their drive for — ahem! — uterine unity, they’re actually supporting Kathy’s candidacy — but they’re giving her views considerable coverage, and they don’t appear to have any information about Susie Swanson, Kathy’s opponent.

Alas, there’s no mention of creationism. The only question that briefly touches on science is this: “If elected, would you support science-based policies designed to protect the environment in Kansas?” Here’s Kathy’s cryptic answer:

If elected, I would be willing to support science-based policies to protect the environment in Kansas.

Whatever that may mean. Anyway, with the recent failure of creationist Mary Lou Bruner to win a seat on the Texas State Board of Education — see Mary Lou — The Election Countdown Ends Here — we’ve been hoping for a high-profile creationist to win public office. We need the entertainment, so now we’re counting on a victory by Kathy.

Oh, wait — while searching on Kathy’s name, we found an article in the Clay Center Dispatch of Clay Center, Kansas, which is in Kathy’s district. Their headline is Two to attend Republican National Convention in July. We can’t see the entire article without registering, but what little we can see is interesting:

Two Clay County residents will be going to Cleveland, Ohio, in July as delegates to the Republican National Convention. Kathy Martin, who served two terms on the Kansas State Board of Education, and is a past Chair and current Vice-Chair of the Clay County Republican Central Committee, will be attending a national convention for the first time. Martin is also running as a Republican candidate for the 64th District Seat of the Kansas House of Representatives against Rep. Susie Swanson.

Kathy is definitely back in action. She’ll be a nightmare in office, but that’s good for this blog, so we say: Go, Kathy, go!

4 responses to “Kathy Martin of Kansas — She’s Back!”