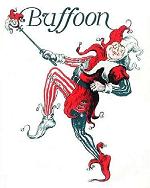 THE FIRST WINNER of the Curmudgeon’s coveted Buffoon Award is John West. He’s a Senior Fellow at the Seattle-based Discovery Institute (the DI), where he is Associate Director of their Center for Science and Culture. That makes him one of the chief Keepers of their Wedge Strategy.

According to his biographical information found at the DI website, Dr. West holds a Ph.D in Government from Claremont Graduate University, and a B.A. in Communications from the University of Washington. Dr. West’s last job prior to becoming a Discoveroid was as an Associate Professor of Political Science at Seattle Pacific University.

Among the informed and rational, anything connected with the DI is suspicious, so it’s fair to warn that we haven’t checked out Dr. West’s resume; but we’ll accept it as accurate unless we learn otherwise. Claremont is real, and any Ph.D they award is also real. In this case the doctorate would be in political science.

Well, it’s official. The Florida House of Representatives refused today to pass the academic freedom measure on evolution previously passed by the state Senate, and so the measure is now dead because the legislative session has ended. Supposedly, the Florida House refused to pass the Senate bill because it favored a stronger measure to require the critical analysis of evolution. As a former political science professor, I can tell you that this explanation doesn’t hold water.

West is angry. Florida was a big defeat for the Discoveroids. They have similar bills pending in Louisiana, Alabama, and a few other states, but Florida was important because of that state’s size. As the fourth most populous state in the US, mandatory creationism — or “critical analysis” — as the Florida House bill required, or even permissive creationism — so-called “academic freedom” — as the Senate’s bill provided, would have had a national impact on textbook publishers.

If the Republican House leadership in Florida really supported academic freedom on evolution, they would have passed the Senate bill. Instead, they shamefully passed a bill earlier this week with language that the Senate had previously rejected, knowing full well this would likely mean the death of any legislation on the topic.

If you are a Florida citizen concerned about academic freedom in your state, you should start demanding some answers right at the top …

If we may re-phrase that: “If you’re a moronic creationist who has been drinking the Discoveroid Kool-Aid we’ve been pouring out, then take crayon in hand and scrawl out an emotional letter …”

But we’ll let West speak for himself. His article concludes:

The good news in all of this is that this issue isn’t going away. There are still bills active in Louisiana, Missouri, Alabama, and Michigan, and we understand that legislation is going to be proposed in even more states. More importantly, we still live in America, and although Darwinists are doing their best to shut down and intimidate anyone who raises questions about Neo-Darwinism, we still have free speech, and they can’t prevent people from hearing about the debate in the public arena, no matter how hard they try.

Actually, Dr. West, no one wants to shut you down. You’re very useful. Without your efforts, how would we know the names of the lunatics in the Florida legislature? And also in Louisiana, Missouri, etc.